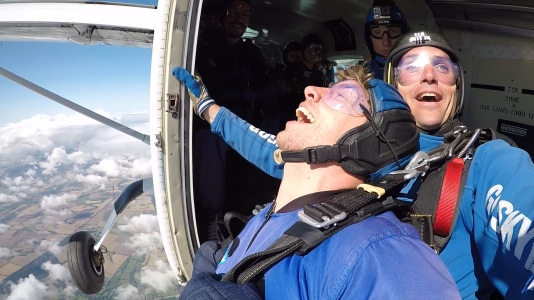 Fear, at its worst, only deals in absolutes. An entirely crippling entity, its very nature can annihilate any previous confidence going into an activity or situation. Yet, it never directly alters what you’re scared of. Think about that for a second. Sure, in a job interview or a college exam, fear plays its part in the nerve-wracking tension that ultimately tends to boil over as you fiddle, pace and overthink. This, of course, is normal for everyone. It’s the extended period of fear, alongside concurrent personal scaremongering which can have the least favourable consequences.

If you have prepared for finals, whether school, college or university, then the majority of you will understand. During my final year of my undergrad degree, a large proportion of my time was spent worrying about the outcome, rather than focusing on the preparation. What did this fear achieve apart from inevitably contributing to a worsening result? Overall, I was quite lucky. However, due to extensive time wasted on worry, my preparation time eclipsed every aspect of my life. The general pattern was to wake up at seven, go for a run, occasionally eat breakfast, and then stare at a book from 9am until midnight. Seven days a week. A considerable amount of time however – probably four hours or so – was spent in absolute panic.  As a consequence, In the space of around eight weeks, I lost approximately 2 stone (28 pounds).

So, clearly, I wasn’t eating as much as I thought I was…

Unfortunately, fear will have no difficulty in taking over every waking moment of your life. Yet, the only time you should genuinely fear a challenging situation, would usually be immediately prior, or during. That fear can help drive us to succeed, after all. Prolonged fear however, I believe, does the opposite; it drains us of our very essence, and sets us up for cataclysmic failure.

Forget everything and run.

Face everything and rise.

‘The choice is yours.’

In the Autumn of last year, I began raising money for a charity skydive. However, it wasn’t until a few months ago that I plucked up the courage to actually do the jump. I have been scared of heights for as long as I can remember. Looking back, once booking the date in, for the first few weeks, I had this sickness; an unsettled stomach in relation to the future – a future that consisted of me jumping out of a perfectly good plane without a parachute!

Inevitably It got so bad that it negatively impacted many other aspects of my day-to-day life. The question was, why let it? As with every aspect of my life, when I’m scared of something, I work towards confidence when facing it. Whether that be examinations, interviews, or something more personal, such as letting my guard down and exposing myself. Thus, instead of sitting in crippling fear, I decided to learn about skydiving, as I did when I learnt to scuba dive (I wasn’t the biggest admirer of the open ocean, either…). It helped me realise that the battle was primarily psychological. A war of thoughts and dramatacism. Ironically, the fear was gone as my feet dangled above the earth. The moment of maximum danger, presented the minimum fear. I think the appreciation for how beautiful the English countryside is… it entirely took over, and it was an experience I will never forget.

Will smith sums it up perfectly
https://www.youtube.com/watch?v=rim2eCqwg74

And with that experience, the fear faded. Sure, it will undoubtedly rear its ugly head once more if I decide to jump again (which is likely), but this time it will be far easier to overcome. It’s important to remember that fear doesn’t make you weak, it stimulates courage.

‘I learned that courage was not the absence of fear, but the triumph over it. Brave individuals are not those who do not feel afraid, but those who conquer that fear.’

All of the greatest things in life are on the other side of fear. So I think it’s time for all of us to fully embrace that. Let’s break our restrictive shackles, and take the first step along a more challenging path. I promise you, the destination is a beautiful one.

A mental health blog created with the intention to provide support and advice through personal experience.

The Colombus Recovery Centre website has brilliant material for helping those in additional need.